How Old Is Your Dog? 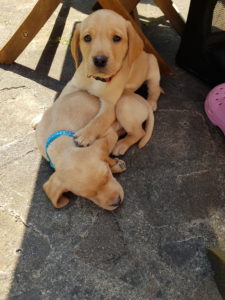 How old is your dog?  It’s often very helpful to consider the maturity of a dog, particularly when you’re engaged in training them-or trying to!  So to be able to determine and compare a dog’s age with that of a human gives us an understanding of their maturity.  Often people expect a great deal from their dogs, expecting them to know things, and it’s usually the larger dogs who have this expectation thrust upon them. Because they’re quite big – often reaching their adult height by about 12 months of age, their behaviour is often expected to be more like an adult dog. It helps to consider them in terms of their ‘child’ associated age.

It’s also useful when considering an older dog.  We think of 12 year old dogs as being quite young, when in fact, it’s not the case at all sadly.  And as anyone who has had an 8 year old dog will contest, as far as the Insurance Companies are concerned, at 8 years of age, a dog suddenly gets quite expensive!  Resulting in premiums increasing exponentially.

Although there are estimated lifespans for each breed of dog – usually the larger the dog, the shorter the lifespan – our Henry proved the estimates wrong.  We only lost him in October 2021 at the tender age of 18 years old, and just 3 months before his 19th birthday.  Just as humans, every dog is individual!

The oldest recorded age for a dog is 27 years.