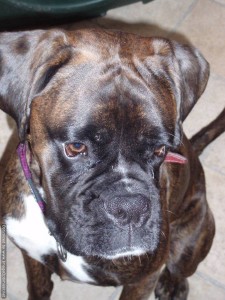 Yogi arrived at 7.00 am.  All full of beans and enthusiasm!  I sorted out the bedding while Yogi began the task of sorting out his pack ranking!!!  Initially, challenges to Henry resulted in Henry getting out of the way – ‘I want peace!’  Maggie submitted straight away ‘do you want to see my tummy?’  Later on after yet another challenge Henry demonstrated to Yogi that he’s older and wiser, “and actually little fella – I’m in charge!”  This kind of challenge is inevitable and will occur with any dogs coming into a home with dogs – the positioning is crucial and usually doesn’t take too long.  This challenging can sound a little alarming as the growling and ocasional barking and bouncing around, but I’m certainly very careful to ensure that it’s all low key and doesn’t become aggressive or nasty in any way but the ranking has to be sorted.  Henry – as the alpha male – 6.5 years senior to young Yogi, just reminding a 15 month old of what’s what!!   The natural order of things in nature’s way!  I often think that this is the scenario from where ‘bark is worse than bite’ is derived!  Certainly Henry can make a lot of noise, but is a big softy! 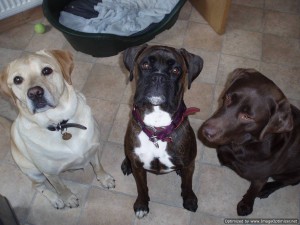 Yogi returned to his investigations of the house – apparently completely underwhelmed by being put in his place!  Yogi can open doors, as he ‘boxes’ the handle until it eventually submits to him and reveals what excitement it is hiding.  Yogi met the ironing board and the vacuum cleaner in this way.  He seemed unimpressed!

We eventually went for a walk – I ridiculously thought this would calm or tire Yogi!  A 50 minute walk with Yogi proved to be something to be survived!!  Excited by everything – not so sure about the Council worker with the garden vacuum, but he turned it off to please Yogi!  I’m sure Yogi comes complete with springs for legs!  and his constant inquisitive expresssion  which almost demanded ‘input, input’ just continued to make me laugh – which caused his expression to change to one of puzzlement, which after a 5 second passing returned to ‘tell me? – what’s that? – what’s this? – where are we going? – where are we going now?  What’s Maggie doing now? What’s Henry doing?  What are you doing Lynn?  Shall I help you?  Do you want some help?  Do you want some help now?  Where are we going?  Shall I go there?  Can I go round there?  What’s that over there?”  Wonderful, wonderful, but exhausting – and all the while Henry and Maggie exchanging glances like ‘What’s going on with this kid?” 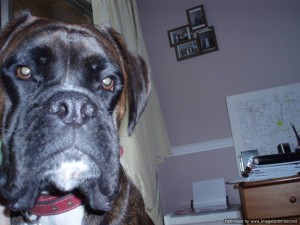 When we got home it was tired time – much to my relief!!  But all were happy and all curled up in their respective ‘favourite places’ for a snooze.  Yogi periodically checked that Maggie and Henry were still asleep by sniffing their sleeping noses!!  At the point of receiving an acknowledgement – along the lines of ‘clear off’ in doggy language I imagine – Yogi would settle down to sleep again!!

4.00 pm and Sarah was home – all excitement again – the peace and tranquility of an afternoon snooze was very short-lived!!  Sarah’s home!  Great excitement! ”My Favourite Thing!!”  Sarah went to get changed out of her uniform, Yogi was there to help – “Sarah, I’ll come with you – I can help tidy your room – shall I help?  What are you doing? Can I come?” 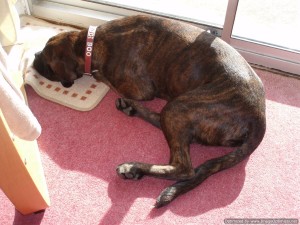 Then it was playing out time again – out into the back garden racing backwards and forwards, backwards and forwards!  This was Yogi!  Maggie decided this was a spectator sport, so she just lounged on the patio watching Yogi – backwards and forwards!  Maggie looked like she was watching a tennis match!  Yogi was like a small child trying to impress “look at me Maggie, look what I can do? Are you watching, I can go this way too!  Are you still watching, look I can do this too?  Are you still watching – look, look!”  Henry stayed in the living room by the patio doors just watching all this great excitement.  It obviously wasn’t something that Henry considered was worthy of his attention!!  He would open his eyes periodically and then obviously determine that it wasn’t worthy of his time and certainly didn’t require his input!

Tea-time was preceded by a further walk – this time, Jezz came along too!  Yogi wanted to be everywhere all at once!  Maggie and Henry weren’t quite sure what to make of it really as they coolly took everything in their stride like they weren’t the daft lumps they usually are!  It was as if they were pretending to be ‘grown up’!!! 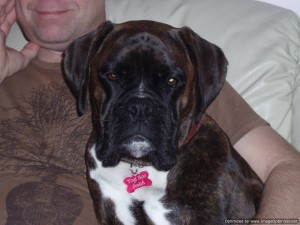 Then Yogi wouldn’t eat his tea, and just watched Maggie and Henry eat theirs!!  We had to hand feed Yogi his tea later on!!

Then we all retired to the living room for the evening.  I was answering emails and working on my website while Jezz read and watched television.  This was all just too exciting for Yogi.  “What are you doing Lynn? – do you want some help?” as he climbed onto my knee as I typed on my laptop!

“What are you doing Jezz – shall I come and sit with you?” as Jezz tried to watch the news, as Yogi gently nudged under his arm.  Yogi’s little enquiring face demanding a response and a cuddle!! 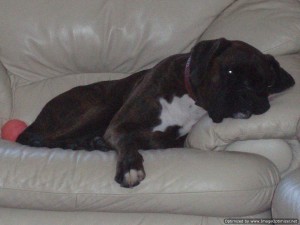 Henry was asleep on the front armchair – a strategic position usually as he can observe all activity within the room, and also ensure that the outside world is in order, as he sits by the window thereby observing any front door callers as well.  His evening position usually doesn’t provide such a vantage point though – upside down with his head buried in the leather arm – used to be a lovely cream colour – with all his legs in the air – not particualrly demure!  This positioning isn’t usually conducive to full observation but it’ll do – after all the ‘parents’ are all present and correct so Mr Top Dog can relax!!

Maggie is usually in the opposite armchair – which also used to be a lovely cream colour!  She too lies with all four legs in the air – not conducive to ladylike behaviour!  Maggie doesn’t particualrly care about observing the outside world at this time – that’s up to the ‘parents’!!

Yogi was fascinated by all this!  Periodically Yogi would release himself from Jezz’s cuddle in order to ensure that Maggie and Henry were still asleep!  Bounding up to each in turn, sticking his nose on their noses, and snorting as if to say ‘Eh! What’re you doing?’  Henry would shuffle about a bit and kind of snort back, so Yogi would bound over to Maggie – a distance of two springy paces(!) and stuff his nose onto her nose, ‘Eh!  What’re you up to?  Do you want to play?’ 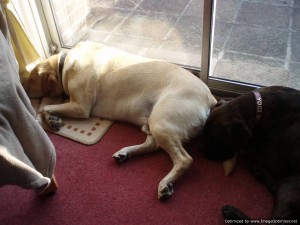 At this point it was almost like Maggie had forgotten Yogi was there!  She slightly opened her eyes as if to say ‘oh go away Henry!’ and then her eyes would snap open like ‘oh my goodness – what is that – oh hello Yogi – I’m sleeping you know’ and she’d shuffle about a bit and go back to sleep.  Yogi would then look from Maggie to Henry and back again, and then glance at me to ensure I was behaving, and then rejoin Jezz on the sofa again snuffling and nudging his way under Jezz’s arm to regain his ‘cuddled’ position, and continue to watch the news!

This little routine was repeated every 5, 10 or 15 minutes!  Yogi had become ‘The Guardian of the Sleeping Ones’!!

When it was bedtime, all three dogs went outside to relieve themselves – Yogi of course was supervising Maggie and Henry to ensure that all was well – all present and correct!  Then it was time to settle down.  We put the dog guard in the doorframe between the Utility Room and the kitchen so that Yogi could have his space and privacy in the Utility room on his own, whilst still being close to Maggie and Henry, being able to see them if he wanted, but so they couldn’t disturb him.  After all, he was not used to being with other dogs at night – more used to snuggling up to his Mum and Dad at home!  He wasn’t sure about this situation initially, standing over the guard looking to see where Maggie and Henry were going to be, but the ‘Goodnight Biscuit’ that Maggie and Henry enjoy seemed to determine that this wasn’t too bad after all!! 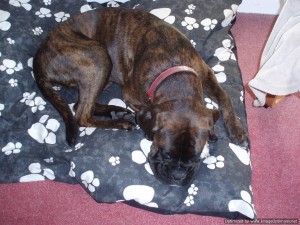